The Lync Server Stress and Performance Tool has a major flaw when using a named SQL instance for the Lync back-end databases.  This post is based on the 7577.120 version of the tool and will not go into all of the ins and outs of the tool.

First off, the GUI and field descriptions in the User Creation tool are very misleading.   Looking at the “Server” tab, it seems pretty straight forward on what to enter in the SQL fields… 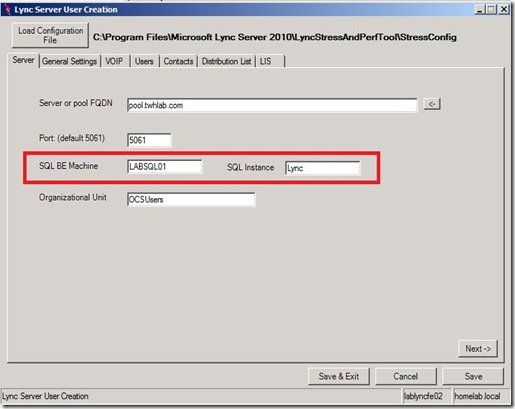 Not the case, according to the Documentation, the following descriptions are used for those fields:

The database name in the Instance field?  Ok, so where do I put my Instance name?  All good questions… the problem is that this is the bug.  The tool does not allow for the SQL instance to be properly entered.  The following examples show different permutations trying to get the right information entered to represent the actual topology.

The tool will refer to the database and instance name as “Lync” (obviously, my database is not named “Lync”):

The tool will refer to the database and instance name as “RTC”(obviously, my SQL instance is not named “RTC”):

The tool will add “RTC” as part of the Instance name and also the DB name:

The tool will add “Lync\RTC” as part of the Instance name and also the DB name:

Basically whatever is entered into the “SQL Instance” field will be used as the Instance and database name.

This could potentially be a great tool to use in the field, but currently it is only useful in a handful of deployments (Standard Edition or default instance installations of SQL back-end).  This has been reported to Microsoft and has been acknowledged as a known issue.  Hopefully a new release will soon be out.

Posted by Tim Harrington at 9:41 AM