Microsoft releases updates to Lync components periodically and only updates the version level of the components that actually get the update.  Because of this, various components of your Lync infrastructure will be running at different versions.  To help with keeping the components at the latest versions, Microsoft has released a single tool to perform updates to your Lync environment.  If you download and run the LyncServerUpdateInstaller.exe, this will check your Lync server and install the updated components that are needed.  Note, that you will need to periodically download the latest version of the installer as the download doesn’t actively check for updates.

So how do we determine the exact versions of the Lync components that we are running?  There are basically three different ways:

There isn’t a great native one-liner within Lync to gather this information.  You would think running Get-CsServerVersion would return this, but it only returns the base version level:

Premal Gandhi blogged a while back about a powershell command that can be used to find this information by using WMI to query the different Lync components.  A commenter to the post modified the original command that I am using below.  The versions can be found by running: 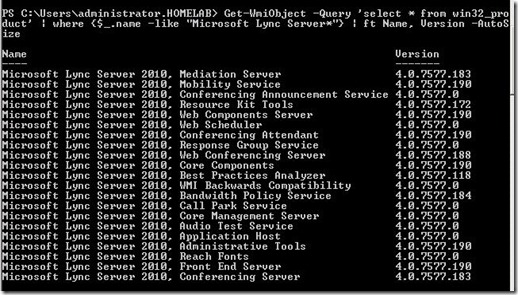 This will list all components associated with Lync Server, even the tools installed like the Resource Kit and Best Practices Analyzer. 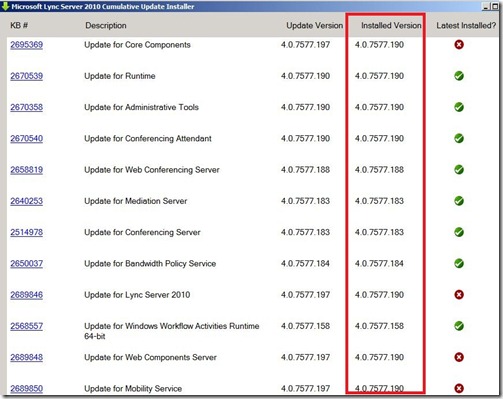 You can also see what versions of Lync components are installed by opening “Programs and Features” within Windows.  By scrolling down to the “Microsoft Lync Server 2010” section you can view the version installed. 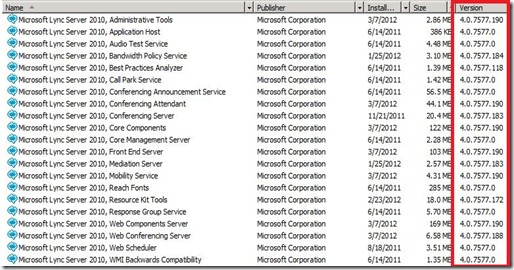 Hopefully this helps you get some clarification on what exact versions of Lync components are installed in your environment.

Posted by Tim Harrington at 8:13 AM